A legal Q&A about our model ordinance

Two counties in California, Santa Clara and San Francisco, became the first jurisdictions in the nation to enact legislation breaking the link between toys and unhealthy restaurant meals.

Now localities and states around the country are interested in passing similar laws that set nutrition standards for children's meals that come with a toy or other incentive item. Our Model Ordinance for Healthier Toy Giveaway Meals provides guidance on how to draft language governing the nutritional composition of children’s restaurant meals that accompany toys. A common question that arises is, “Is this legal?” This Q&A provides additional information to help answer that question.

Q: Do local governments have the authority to enact ordinances regulating toy giveaways?

A: The answer depends on the law of each state. In most states, cities and counties have the authority to enact basic business regulations using their police power. Police power is the power of local governments to regulate private conduct to protect and further the public’s health, safety, or general welfare. Many localities already regulate restaurant operations through zoning and other measures, such as bans on smoking and on the preparation and service of foods containing artificial trans fats. However, it is important to consult each state’s retail food law to determine whether it contains provisions that prohibit local regulation of restaurant operations or otherwise govern toy giveaways. These laws may preempt local regulation of the same subject matter.

A: The First Amendment to the U.S. Constitution protects most forms of speech, including “commercial speech” or advertising. However, our model toy giveaway ordinance, as well as the ordinances in Santa Clara County and San Francisco, should not raise First Amendment concerns because these measures regulate a business practice rather than a form of speech.

In order to maintain the regulatory focus on business practices, it is important that toy giveaway laws be drafted to govern the practice of giving away the toy itself rather than governing advertising for the toys or meals. If a bill or ordinance directly regulates the advertising of toys with children's meals—or even if it uses words like “advertising” or “marketing” in connection with the practice of giving away toys—it may be more susceptible to a First Amendment challenge. A local ordinance is more likely to avoid First Amendment problems if it addresses which meals a toy can be given away with, rather than which meals can be marketed to children through television or other media. 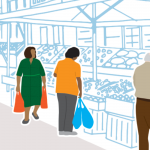