Walking and bicycling to school is an important way for children to get exercise and a valuable tool in the battle against childhood obesity.

But fewer schools are walkable than in the past, and strategies for promoting walkable schools cannot be considered without taking into account a stark fact: high levels of neighborhood segregation leave many children from lower-income families in segregated schools, with often dire educational consequences.

In 2010, the Safe Routes Partnership and ChangeLab Solutions became concerned about a potential negative consequence of an emerging area of work. Both organizations were beginning to advocate for schools to be in locations close enough to children’s homes to allow walking and bicycling to school and permit children to come back to school grounds to play on weekends and after school.

Recognizing that high levels of neighborhood segregation in the United States could mean that this strategy had the effect of increasing racial and economic segregation in schools, the two groups reached out to PolicyLink to initiate a frank, informed, thoughtful, and respectful conversation around the benefits, tensions, and balancing of diverse and walkable schools. With support from the Robert Wood Johnson Foundation, the three organizations convened health and education advocates in New York City in September 2011 to examine the implications of advocating for diverse, racially integrated schools and advocating for schools to which children can safely walk and bicycle.

The collaboration greatly benefited from the ideas, guidance, and writing of the leaders of the 21st Century School Fund and the Center for Cities and Schools at the University of California, Berkeley. This new report, drawn from a national dialogue among leaders in health and public education, with accompanying research, answers the question in the affirmative. It also outlines the factors that determine how and where schools get built for different populations, and proposes action steps for promoting diverse, walkable, high quality schools for all children. 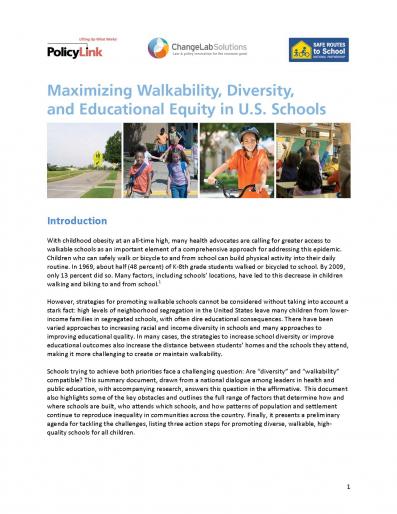 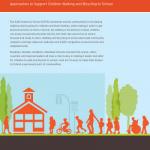 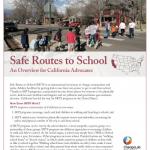 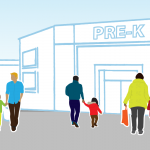