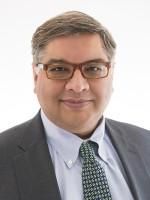 Adolph Falcón, MPP, is a nationally recognized expert on Hispanic health issues. He is executive vice president of the National Alliance for Hispanic Health and director of the alliance’s Healthy Americas Institute at the Keck School of Medicine of the University of Southern California.

He has played important roles in several pieces of federal legislation, including the Disadvantaged Minority Health Improvement Act of 1990, the Sugar-Sweetened Beverages Tax Act, and the Personal Care Products Safety Act. He has also worked on initiatives funded by federal agencies such as the Centers for Disease Control and Prevention, the Food and Drug Administration, and the National Institutes of Health. He currently leads initiatives on youth vaping with the Robert Wood Johnson Foundation and on equity in human services with The Kresge Foundation. He also serves on the board of National Assembly Business Services, one of the nation’s largest group purchasing plans for nonprofits, and on the advisory boards of the Nonprofit Finance Fund and Sesame Street in Communities, among others.