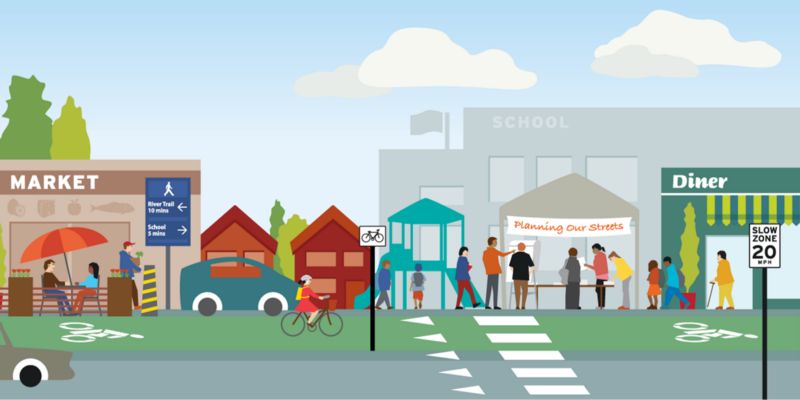 Where you live plays a significant role in how healthy you are. But when it comes to promoting health, not all neighborhoods are created equal. And neighborhoods with the best access to health-promoting resources — like quality housing, good jobs, well-maintained parks, healthy food, and excellent schools — aren’t accessible to everyone.

Today, many of the differences between neighborhoods exist because of decades’ worth of interrelated policies that have cumulatively influenced where investment and opportunity have concentrated and who has access to them. The result is increasing health disparities and exacerbated inequities in communities across the country. Read on to learn more about 8 laws and policies that have created unhealthy places and about tools and resources that can help heal policy harms and create healthy neighborhoods for all.

Repeated housing policy–driven segregation set the stage for decades of disinvestment in low-income communities and communities of color. Today, we see the effects of this disinvestment in poor-quality housing, run-down streets and open spaces, low-performing schools, lack of access to healthy food, depressed household wealth, and exposure to crime and violence in those communities. As a result, the low-income residents and residents of color who live and work in these communities experience worse physical and mental health.

The fact that housing policies have historically segregated communities by race and class is well documented. Much of this historical segregation can be traced back to the 1930s, when the Home Owners’ Loan Act and the National Housing Act supported homeownership for white people and investment in racially “harmonious” — that is, segregated — development. In the 1940s, the GI Bill reinforced this segregation through low-cost, government-backed housing mortgages for white veterans. Combined, these policies ensured that more than 98% of all federally insured home loans between 1945 and 1959 went to whites to purchase homes in newly constructed suburbs. During this same time period, discrimination under the Housing Act of 1949 allowed wealthier communities to limit new public housing development and to locate projects that were built in and around existing low-income communities and communities of color. Finally, local land use regulations have allowed residents from wealthier neighborhoods to successfully restrict where and how much multifamily housing gets built in their communities. Combined, these policies have played a major role in enforcing and perpetuating racial and socioeconomic segregation since the 1930s.

To learn more about creating bold and innovative housing initiatives, check out our Health & Housing Starter Kit and LocalHousingSolutions.org.

Exposure to air, water, and soil pollution increases a person’s risk of asthma, lung disease, gastrointestinal illness, reproductive problems, neurological disorders, and cancer. Segregation has enabled the policies discussed in this section to concentrate the health burden of polluting development and infrastructure (ie, highways, waste processing facilities, refineries, ports) near low-income communities and communities of color. For example, children of color are at least twice as likely to die from asthma as white children. And neighborhoods of color disproportionately bear the burden of lead toxicity.

The Federal Highway Act of 1956 provided 90% of the funds for highway construction across the country. Most of the funds were spent on highways serving white residents in new suburban communities. Where it was necessary to build highways through existing neighborhoods, the neighborhoods that were chosen for demolition were the same neighborhoods whose disinvestment, segregation, and poverty were shaped by the New Deal, the GI Bill, and the Housing Acts. In the aftermath of neighborhood demolition and highway construction, these highway-adjacent neighborhoods experienced decreased property values and higher levels of environmental risk from air pollution, high levels of ambient noise, and other factors.

To learn more about strategies to reduce disparate environmental impacts, check out our podcast Richmond: A Change in the Air, our Building Healthy Infill guide and our Healthy Planning Guide.

Regular physical activity provides a host of both mental and physical health benefits, from reducing anxiety and depression to reducing the risks of chronic diseases like diabetes, heart disease, and certain cancers. However, there are significant disparities in the quality, safety, and accessibility of active transportation and open space networks across the country. That’s no surprise, considering the legacy of the policies discussed in this section, which have limited placemaking investments in low-income communities and communities of color.

State and local governments use capital improvement plans to decide which neighborhoods to prioritize for investments in the built environment and which transportation and open space improvement projects to fund. These prioritization decisions are typically made by elected officials and city staff. But the race and socioeconomic status of government officials are often not representative of the neighborhoods they serve. In addition, elected officials are often influenced by small groups of stakeholders with greater power and voice than the community at large. When the priorities of elected officials and interest groups not representative of the broader community, decisions about capital improvement investments might be made based on political influence and not on neighborhood need. This government-community power dynamic can exacerbate segregation-driven disinvestment. Examples such as the situation in Minneapolis are all too common, where the city’s low-income neighborhoods and neighborhoods of color receive the least funding for transportation and recreation spending. The reality is that low-income neighborhoods and neighborhoods of color consistently have the fewest transportation and open space resources for physical activity.

Many cities rely on complaints submitted by residents to identify where and when streets, utilities, open spaces, streetlights, and other infrastructure or systems need fixing or replacing. Low-income residents and residents of color, however, may not trust unrepresentative government, know the protocols, or have access to the forms or technologies needed to submit complaints. So neighborhoods in need of more maintenance may receive less attention from the city because that neighborhood’s concentration of low-income residents and residents of color tend not to report problems. The result can be chronically broken streetlights, cracked sidewalks, overgrown or littered parks, and graffiti, which not only reduce physical activity but lower property values and decrease residents’ sense of safety.

Higher educational attainment is linked to better health for individuals and their children, including reduced risk of chronic diseases such as obesity, heart disease, and diabetes, as well as reduced frequency of unhealthy behaviors such as smoking, substance abuse, unsafe sex practices, poor diet, and lack of exercise. Overall, college graduates can expect to live at least 5 years longer than high school dropouts. And education disparities are exacerbated over generations because the children of parents with a bachelor’s degree are significantly more likely to graduate from college than children of parents with just a high school diploma or less. Education is also a key driver of wealth; each additional year of schooling represents an 11% increase in income. By creating segregation-driven disparities in school funding, the policies discussed in this section have hindered educational attainment in low-income communities and communities of color.

School budgets are a mix of local funds and state aid. At the local level, school funding comes primarily from property taxes paid by landowners. The segregation, concentrated poverty, and disinvestment driven by policies such as the New Deal, the GI Bill, the Housing Acts, and land use regulations mean that low-income communities and communities of color have lower land values, resulting in lower tax revenue and less local funding for schools.

This lack of local funding can be made worse by states’ school finance systems. Many states provide minimum levels of aid (ie, flat block grants) that are equally distributed to all districts regardless of need. As a result, districts in affluent areas get funding they don’t need. Some states also use average daily attendance rates to allocate funding. Low-income students and students of color are more likely to have a range of adverse experiences or chronic physical and psychological health conditions that affect their attendance rates. As a result, districts with high percentages of students who need a lot of support actually get less funding.

To learn more about creating innovative school funding initiatives, check out our Not Making the Grade report on school funding and our Smart School Sitingresource.

Families and individuals who are struggling to make ends meet find it hard to afford the kinds of services, activities, and products that support, protect, and improve health. In fact, income is a significant predictor of health outcomes. And governments with strained budgets in both small towns and big cities also find it hard to invest in the improvements to streets, open spaces, schools, housing, and food systems that would improve residents’ health.

Community and government wealth go hand in hand. Policies that have driven disinvestment, segregated homeownership, concentrated poverty, and depressed property values have limited wealth accumulation among people of color for many generations. In turn, lack of wealth has reduced public coffers by limiting property and income tax revenue in their communities. Ultimately, this lack of revenue has hindered the ability of low-income communities and communities of color to improve their built environments and attract investment.

The Tax Reform Act of 1986 expanded the tax benefit of homeownership by increasing deductions for interest on home mortgages. The discriminatory lending practices and race covenants of New Deal, GI Bill, and the Housing Act policies in the 1930s and 1940s resulted in significantly higher rates of homeownership among whites. As a result, predominantly white neighborhoods with high homeownership rates have disproportionately benefited from the wealth-building tax break on home mortgage interest for over 30 years. The financial relief this benefit provides is one of the reasons that homeowners experience better health outcomes compared with renters. This is an example of how a seemingly race-neutral policy can expand health disparities by reinforcing the benefits and barriers that were created by other policies that preceded it.

The majority of the revenue that makes up local government budgets comes from taxes and assessments (such as sales tax, property tax, or park maintenance assessments) and user fees (such as utilities fees). Policies such as the New Deal, the GI Bill, the Housing Acts, and land use regulations have concentrated wealth-generating tax bases in white communities. The smaller tax base in low-income communities and communities of color has made it more difficult for them to invest in health-supporting environments, services, and programs.

This piece is part of the Building Healthy, Equitable Communities Series and is the fourth of our policy posts exploring the often unexpected ways that laws and policies can help — or hinder — community health. Take a deeper dive into the topic of place-based strategies through archived recordings of the companion webinar and conversation with an expert panel.

Erik Calloway is a senior planner at ChangeLab Solutions who focuses on the links between the built environment and health. He conducts research, prepares strategies, and develops tools to help communities support healthy living and sustainability.

Chassidy Hanley is a policy analyst at ChangeLab Solutions, where she works on issues related to healthy housing, violence prevention, and the built environment.